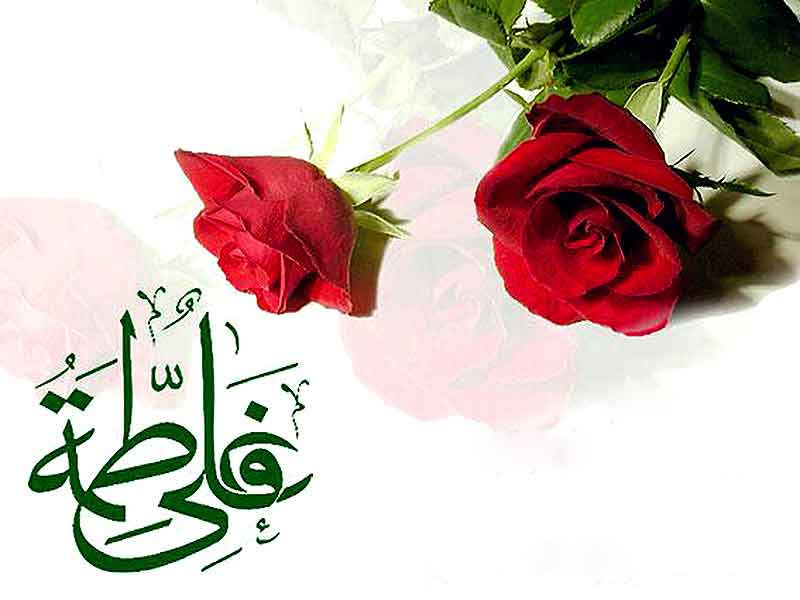 Question 275: salam and jum’ah mubarak to all i have a question about imam ali and fatima zahra a.s. imam is a cousin of prophet muhammad s.a.w and he was also the uncle of fatima, right? so my question how prophet s.a.w agree to marry her daughter to imam ali? and what is a sign that allah agree to marry his daughter? and what hadith in sunni narrated about the aproval of allah s.w.t to marry imam ali and fatima?

Answer 275: Imam Ali (sa) was the cousin of the Holy Prophet (pbuh). His father was Abū Ṭālib ibn ‘Abd al-Muṭṭalib and His mother was Fatima bint Asad.

Fatima Zahra (sa) was the daughter of the Holy Prophet (pbuh). Her mother was Khadīja bint Khuwaylid (sa).

There has not directly mentioned in any verse of the Holy Quran an issue related to the marriage of Imam Ali (as) and Lady Fatimah Zahra (sa), however there are verses of the holy Quran that somehow related to this issue, as follows:

The Holy Prophet (pbuh) had two sons were born of the Lady Khadijah namely; Ghasem and Taher (also called ‘Abdullah) who died in Mecca and so, there was no live male issue from the holy Prophet (pbuh), so, the Arabs used to call the one who had no son (abtar). Hence after, the holy Quran applied this name to the enemies of the Prophet.

Note: The Messenger of Allah (S) had another son by the name of Ibraheem, was born of Mariyah Qibtiyyah in 8 AH. He also died before he was 2 years old.

Therefore, as the abundance of goodness and blessing the Kawthar has granted to the Holy Prophet by Allah, the Almighty. This verse refers to the marriage of Imam Ali (as) and Lady Fatimah Zahra (sa).

The Arabic version of this Hadith:

Imam Sadiq (as) has said: the word “Marajal­baḥ­ray­ni  yal­taqiyān” refers to Imam Ali (as) and Fatimah Zahra (sa) and “Yakh­ruju  min­humallu­lu­u  wal­mar­jān” refer to Imam Hasan and Imam Hussain (pbuth).[3]

The Arabic version of this Hadith is as follows:

Index: The exact date on birth or Martyrdom of Lady Fatima and Infallibles, answer 254.

Index: Who were behind the Martyrdom of Lady Fatimah al-Zahra (sa), answer 486.

Index: Birthplace of Ali ibn Abi Talib / He was born in Kaaba, answer 069.

Answer 244: “Fadak” was a thriving and flourishing village located near Khaybar, 140 kilometers from Medinah. In the seventh of hijrah, the fortresses of Khaybar were conquered one after another and the central power of the Jews was overthrown. The residents of Fadak surrendered and promised to give the prophet (pbuh) half of their lands and orchards on condition of no fighting and keep the rest for themselves. In addition, they accepted to do the farming of his lands for a wage. END_OF_DOCUMENT_TOKEN_TO_BE_REPLACED 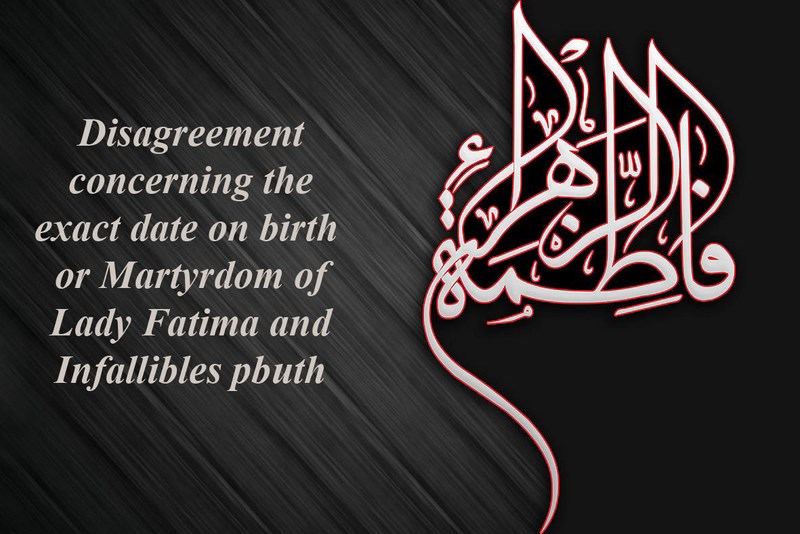 Question 254: I am having a query that we people do not know the exact date of our imams birthday or martyr as we knew imam al Mahdi (.a.s) is present? Example, the exact date on birth or Martyrdom of Lady Fatima (sa)?

Answer 254: There have been many different reasons why we Shia don’t have an exact date of the martyrdom or birth of our Infallibles (pbuth) as follows:

People didn’t narrate the historical events during the times of our Infallibles (pbuh) as we do, now.  Due to lack of facilities, they didn’t keep such important issues on book or text to be transferred to the next generations. Narrating historical events were verbally at that times. Obviously, no one can claim that all of these narrators were immune to mistakes even about the date of birth of the Holy Prophet (pbuh) as we see different opinions in this regards. The people didn’t also record the date of birth of their children.

Given to the fact that knowing the exact date of martyrdom or birth of our Infallibles (pbuth) was more important according to Shia narrators, most of scholars of this filed have been mentioned a solution by which people can understand it easily. They have been determined a date for such events based on the authenticity attained by scientific researches.

There has been mentioned different opinions about how long has the Lady Fatimah (sa) been alive after the demise of the Holy Prophet (pbuh) in Hadithic or historical books. Some say it was forty days and others mentioned six months.[1]

According to Shia, the most authentic tradition in which mentioned the exact date of martyrdom of Lady Fatimah (sa) is a hadith narrated from Imam Sadiq (as) as He has said: Indeed, the date of martyrdom of Seddiqah Kubra (sa) is three months after the  demise of the holy Prophet (pbuh).[2]

According to Tabarsi (ra) Hadhrat Seddiqah Tahirah (sa) has passed away in Jumada al-Akhira in the eleventh year of the hegira. She had lived 95 days after the demise of the holy Prophet (pbuh).[3]

In his book Dalael al-Imamah Late Tabari narrated a hadith from Imam Sadiq as He has said: Lady Fatima Zahra (sa) has passed away on Tuesday in the month of Jumada al-Akhira, in the eleventh year of the hegira.[4]

Most of shia scholars including Sayyid bin Tawoos have accepted these above mentioned ahatith as authentic.[5]

There is another sahih hadith narrated by Late Kuleini from Imam Sadiq (as) as He has said: Indeed, Lady Fatima (sa) were alive seventy five days after her beloved Father (pbuh).[6]

Probably, the reason why some of scholars say it was ninety five days and others say seventy five days after the Prophet’s (pbuh) death is that the punctuation wasn’t prevalent at that time. Taking the following words into consideration can confirm the reason.

If we delete the spot of the letter “B” in the word “sab­’ôn” (seventy) and add two spots above the first letter of the word it would be pronounced “Tes­’ôn” (ninety).

Note: According to great Shia scholars, the most authentic date of martyrdom of Lady Fatima Zahra (sa) is ninety five days after the Prophet’s (pbuh) death.[7]

Question 486: Asallamu alaikum. My questiön is: Who were behind the Martyrdom of Lady Fatimah al-Zahra (sa)? 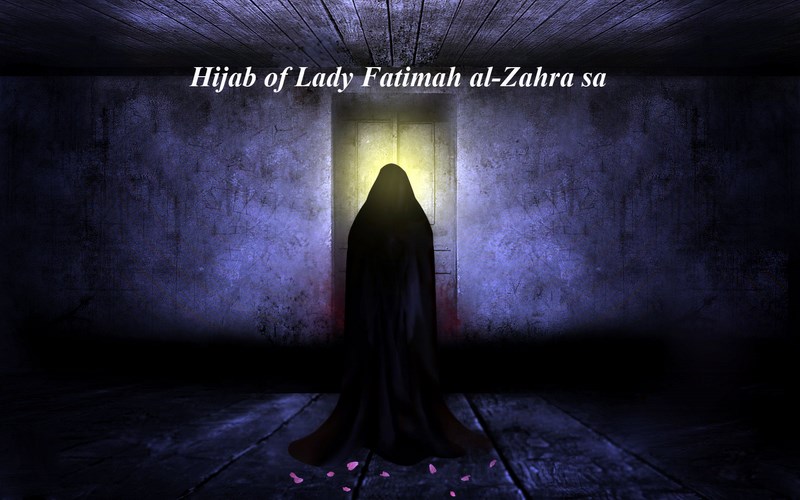 Question 492: Did Lady Fatemeh (peace be upon her) covering her face and hands? Please, explain in detail about Hijab of Sayeda Fatima (sa).

Answer 492: Qena was prevalent among women by which some of them covered their face at the advent of Islam. According to some traditions narrated from our Infallibles (PBUTH), Lady Fatimah al-Zahra has used such coverage in front of non-Mahram. Qena means something by which women covers their face.[1]

Imam Baqir (AS) has said that Jaber bin Abdullah Ansari was with the Holy Prophet (PBUH). They went out of house in order to meet Fatimah al-Zahra (SA). “When we reached there, the Holy Prophet (PBUH) pushed the door and said: Assalamu Alaikum. Lady Fatimah (SA) replied: Wa Alaika assalaam ‘O the messenger of Allah (PBUH). The Prophet said: Could I come in? She (SA) replied: Yes, come in. The Prophet said: there is one person whom come along with me. Is he also allowed to come in? No, I don’t have a proper cover. Meaning that she didn’t have Qena on her face.[2]

It is said that during the Fadak event, when Fatimah (SA) wants to go out of house she always covered her face with Borgha’.[3]

When it is proved that Abu Bakr forcefully took Fadak and didn’t want to give it back to Lady Fatimah (SA), she covered her head with a veil and was going toward the Holy Prophet’s (PBUH) mosque. While she was among some religious women and her relatives, her clothes were long in a way that all of her body and feet were covered. She walked like the Holy Prophet (PBUH). When she reached the mosque, the people of Muhajir and Ansar created a place for her that men were unable to see her.[4]

It is understood from historical sources that women were observing hijab in the time of the Holy Prophet (s) (PHUTH), but not complete hijab because the Arab women would wear a scarf, but they would place the ends behind their head so that their earrings, neck and chest would show since their dresses were most often v-necked. They used to wear dresses with open collars leaving their necks and part of their chests visible.[5]

Lady Fatimah (SA) is the best example for all women from all around the world to follow her. She (SA) observed hijab completely, even when a blind man entered her house with the Holy Prophet (PBUH), she went out of the house in order that the man cannot even smell her. Also, she made a will to Imam Ali (AS) that when I die, shroud and bury me at night. O Ali, (AS) make a coffin for me that could hide my body.[6]