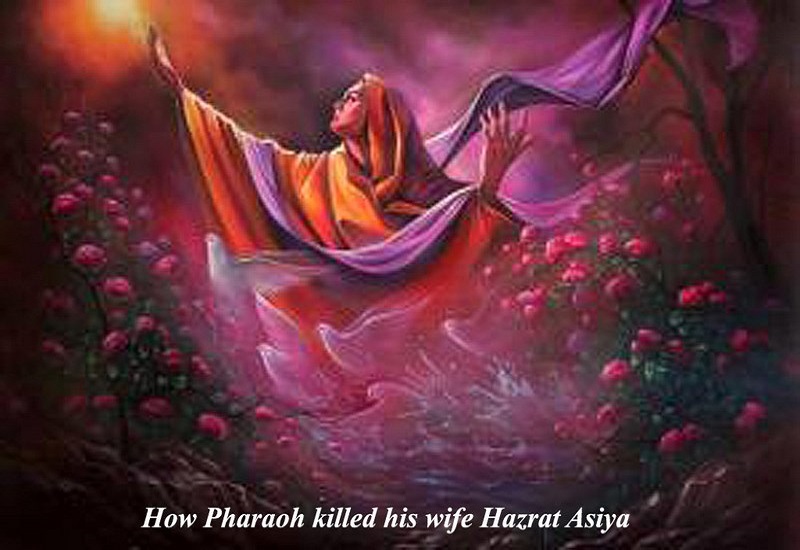 Question 528: Has Pharaoh stitched nails on fingers of his wife Hazrat Asiya Bint Muzahim and has he ordered to remove her skin before her death.

Answer 528:  When Asiya, Pharaoh’s wife, witnessed Moses’ miracle in front of the sorcerers, her heart was lit with the light of Iman (belief in the One God). She started to believe in Moses. She was trying to hide her faith from Pharaoh but faith and love of God is not something to be concealed. When Pharaoh learned about her faith, he forbade her times and again from believing in Moses; he pressured on her to give up his religion and abandon his God but she never surrendered herself to Pharaoh’s demand.

Again, the Pharaoh has ordered his courtiers to remove the skin of the queen. Due to the kind help of Allah, she still hasn’t died upon removing of the skin from her body, but they’re full of blood on her body. Still the Pharaoh was not satisfied by his severe punishment in this matter, so he ordered his courtier to put a heavy stone on her chest and let her die there.

When she was breathing the last moments of her life, she prayed to God as such: “O my Lord! Build for me, in nearness to Thee, a mansion in the Garden, and save me from Pharaoh and his doings, and save me from those that do wrong.”[1] God, the Exalted, accepted the prayer of this faithful, chaste and devoted woman and put her beside some of the best women of the world like Maryam.[2]

Lady Asiya’s grave is in Egypt.[3] As for the age at which she died, there is no precise information available. We referred to historical sources to find information in this regard but to no avail[4].

Index: Four Women Chosen as the Best above the Women of the World, answer 542.

Index: Good women are for good men / Types of Family in Quran, answer 512. 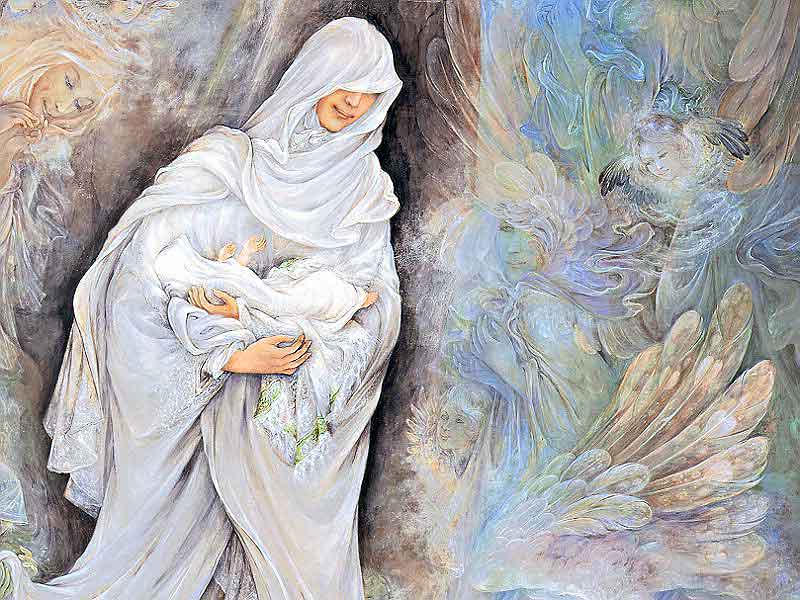 Question 542: Assalam o alaikum, Who is Khair Un Nissa in Quran? Which 6 respected ladies have been mentioned in Quran? Explain about them according to their status in eyes of Allah with reference of Quran

Answer 542: Lady Mary (sa) is the only woman has clearly mentioned in the Holy Quran by name. “And when the angels said: O Mary! Surely Allah has chosen you and purified you and chosen you above the women of the world”. But, in other verses of the holy Quran Allah (SWT) narrated some behaviors and conditions of a few women that show scope of the human beings actions. As a result, Quran has more emphasized on the actions rather the name of individuals.

The Story of some Unique Women mentioned in the Holy Quran:

B: The Mother and Sister of Prophet Musa (as) and The Wife of Pharaoh: In surah al-Qasas and Taha Allah, the Most High points the story of Mother and Sister of the Prophet Musa (His mother’s name: Historians have different opinions about her name. Some of her names are: Youkhabed, Youkabed, Nakhib, Afahiyeh, Youkhbid, Youkhabil[6]), His sister and Asiya, the Wife of Pharaoh.

Surah Qasas: “And We inspired the mother of Moses, saying: Suckle him and, when thou fear for him, then cast him into the river and fear not nor grieve. Lo! We shall bring him back unto thee and shall make him (one) of Our messengers. And the family of Pharaoh took him up, that he might become for them an enemy and a sorrow, Lo! Pharaoh and Haman and their hosts were ever sinning. And the wife of Pharaoh said: (He will be) a consolation for me and for thee. Kill him not. Peradventure he may be of use to us, or we may choose him for a son. And they perceived not. And the heart of the mother of Moses became void, and she would have betrayed him if We had not fortified her heart, that she might be of the believers. And she said unto his sister: Trace him. So she observed him from afar, and they perceived not. And We had before forbidden foster-mothers for him, so she said: Shall I show you a household who will rear him for you and take care of him? So, We restored him to his mother that she might be comforted and not grieve, and that she might know that the promise of Allah is true. But most of them know not. [7]”

Surah Taha: “When We revealed to your mother what was revealed. ” Saying: Put him into a chest, then cast it down into the river, then the river shall throw him on the shore; there shall take him up one who is an enemy to Me and enemy to him” And I cast down upon you love from Me, and that you might be brought up before My eyes. When your sister went and said: Shall I direct you to one who will take charge of him? So We brought you back to your mother, that her eye might be cooled and she should not grieve And you killed a man

And I have chosen you for Myself”[8]

In Surah Tahrim there is a verse in which Allah (SWT), for the believers, talks about Asiya, the Wife of the Pharaoh. “And Allah sets forth an example to those who believe: the wife of Firon when she said: My Lord! build for me a house with Thee in the garden and deliver me from Pharaoh and his doing, and deliver me from the unjust people”.[9]

C: Two Daughters of Jethro’s (The Father in Law of the Prophet Moses): In the holy Quran Allah, the Almighty also talk about two daughters of Shoaib (Jethro) as follows.

“And he went into the city at a time of unvigilance on the part of its people, so he found therein two men fighting, one being of his party and the other of his foes And he who was of his party cried out to him for help against him who was of his enemies, so Musa struck him with his fist and killed him He said: This is on account of the Shaitan’s doing Surely he is an enemy, openly leading astray. He said: My Lord! Surely I have done harm to myself, so do Thou protect me. So He protected him. He said: My Lord! Because, Thou hast bestowed a favor on me, I shall never be a backer of the guilty. And he was in the city, fearing, awaiting, when lo! he who had asked his assistance the day before was crying out to him for aid Musa said to him: You are most surely one erring manifestly. So, when he desired to seize him who was an enemy to them both, he said: O Musa! do you intend to kill me as you killed a person yesterday? You desire nothing but that you should be a tyrant in the land, and you do not desire to be of those who act aright. “And a man came running from the remotest part of the city. He said: O Musa! surely the chiefs are consulting together to slay you, therefore depart (at once); surely I am of those who wish well to you”. So he went forth therefrom, fearing, awaiting (And) he said: My Lord! deliver me from the unjust people. And when he turned his face towards Madyan, he said: Maybe my Lord will guide me in the right path. And when he came to the water of Madyan, he found on it a group of men watering) their flocks (, and he found besides them two women keeping back (their flocks). So, he watered (their sheep) for them, then went back to the shade and said: My Lord! surely I stand in need of whatever good Thou mayest send down to me. Then one of the two women came to him walking bashfully. She said: My father invites you that he may give you the reward of your having watered for us So when he came to him and gave to him the account, he said: Fear not You are secure from the unjust people. Said one of them: O my father! employ him Surely the best of those that you can employ is the strong man, the faithful one. He said: I desire to marry one of these two daughters of mine to you on condition that you should serve me for eight years But if you complete ten, it will be of your own free will And I do not wish to be hard to you If Allah please, you will find me one of the good. He said: This shall be (an agreement) between me and you Whichever of the two terms I fulfill, there shall be no wrong doing to me And Allah is a witness of what we say. So, when Musa had fulfilled the term, and he journeyed with his family, he perceived on this side of the mountain a fire. He said to his family: Wait, I have seen a fire, maybe I will bring to you from it some news or a brand of fire, so that you may warm yourselves”.[10]

Note: In the Holy Quran Allah, the Almighty sets forth an example to those who disbelieve: the wife of Noah and the wife of Lot, as follows: “They were both under two of Our righteous servants, but they acted treacherously towards them so they availed them naught against Allah, and it was said: Enter both the Fire with those who enter”[11]

Who are the best Woman according to the holy Quran and Traditions?

Lady Mary (sa): The Holy Quran has stated two choiceness for Lady Mary (sa). Absolut choiceness and being chosen above the women of the world.[27] In this verse of the holy Quran, her purification has also been emphasized. Also, Lady Mary is a sign of Allah. “And We made the son of Marium and his mother a sign, and We gave them a shelter on a lofty ground having meadows and springs (Baitul Moqaddas)”[28]

The reason why she has been considered as the sign of Allah is that she become pregnant without husband and having any relation with a man.[29]

Another reason is that she was of the obedient ones.[30] She was also Mother of Prophet Jesus (as). “and his mother was a truthful woman”[31]

Along with Asiyah, she was example to those who believe. “And Marium, the daughter of Imran, who guarded her chastity, so We breathed into her of Our inspiration and she accepted the truth of the Words of her Lord and His books, and she was of the obedient ones”[32]

What is the meaning of the word ‘Nisaa al-Alameen’ (Women of the World)? Does it mean that she has chosen above the women of the world such as women of her time or all women from the time of Adam to the present? The holy Prophet (pbuh) said to Imam Ali (as): O Ali there are four women chosen as the best above the women of the world: 1. Asiyah (the Wife of Pharaoh) bint Muzahim. 2. Mary, the daughter of Emran. 3. Khadijah bint Khuwailad. 4. Fatimah, My Daughter. But, Lady Fatimah is superior to the others. [33]