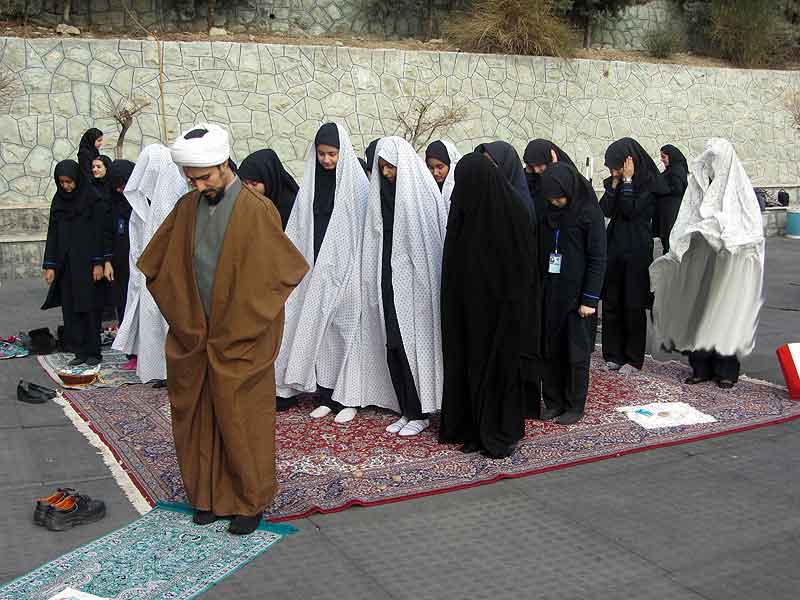 Question 594: Salam. I wonder what obligatory parts men and women need to cover when performing Salat?

Brief answer 594: While offering prayers, a man should cover his private parts even if no one is looking at him, and preference is that he should also cover his body from the navel up to the knee.

A woman should cover her entire body while offering prayers, including her head and hair. As a recommended precaution, she should also cover the soles of her feet. It is not necessary for her to cover that part of her face which is washed while performing Wudhu, or the hands up to the wrists, or the upper feet up to the ankles. Nevertheless, in order to ensure that she has covered the obligatory parts of her body adequately, she should also cover a part of the sides of her face as well as lower part of her wrists and the ankles.[1]

Detailed answer 594: In case of ability, it is obligatory to cover the private parts in prayer and its appurtenances like the Rak’at offered by way of caution, and according to the stronger opinion, the compensatory prayer for the forgotten portions, and according to the more cautious opinion, the two prostrations due to inattention, as also in the supererogatory prayers excluding the prayer of the dead, though, according to the more cautious opinion, also including it, while caution must not be given up during the performance of the circumambulation.

If the private part of a person becomes visible due to wind or negligence, or it was visible from the beginning of the prayer without the knowledge of the person offering praying, the prayer shall be valid. However, the person should cover it immediately, if he comes to realize about it during the prayer. It is more cautious to finish it, and start it anew.

The same rule applies in case he forgets in both cases.

The private parts of a man which are required to be covered and are forbidden to look at during prayer are the anus, the penis and both the testicles. It is more cautious to cover the indistinct figure of the private parts visible from behind the clothes without distinction of the color.

As regards the parts of a woman which are required to be covered during prayer, they include her entire body including even her head and hair excluding the part of her face which is required to be washed for ablution and both her hands upto the forearms and both feet upto the ankles. It is obligatory to cover a little of the parts mentioned as excluded from being covered.

It is obligatory on a woman to cover her neck and the lower part of her chin including even that much of it as can be seen after wrapping the scarf (khimãr).

A slave girl and small girl are treated at par with a free and adult woman, except that it is not obligatory on them to cover their head, hair or neck.

In case, however, there is a net under which no person is expected to look from under as a.net on a well, then, according to the stronger opinion, it is not obligatory (cover the private parts from below), except when there is a person looking in the net.

The hiding from sight may be obtained through any means which may hide a thing from sight, including even a hand, coating with mud or dipping in water. Even both the hips are sufficient to cover the anus.

The hiding of the (private parts) in prayer is not sufficient by means of the things mentioned above, even in case of an emergency.

As regards covering (the private parts) by means of leaves, grass, cotton, and unwoven wool, according to the stronger opinion, it is permissible generally, though caution must not be given up in case of the first two.

When a person offers the forgotten Sajdah or tashahhud, he should cover himself in the same manner as in prayers, and the recommended precaution is that he should also cover himself at the time of offering Sajda-e-Sahv.

If while offering prayers, a person does not cover his private parts intentionally, or on account of not having cared to know the rule, his prayers is void.

If the dress of a person covers his private parts while he stands, but it may not cover them in another posture like in Ruku or Sajdah, his namaz will be valid if he manages to conceal them by some other means. However, the recommended precaution is that he should not pray in such dress.[3]

Index: The best place for a woman to pray is at home or mosque, answer 015.