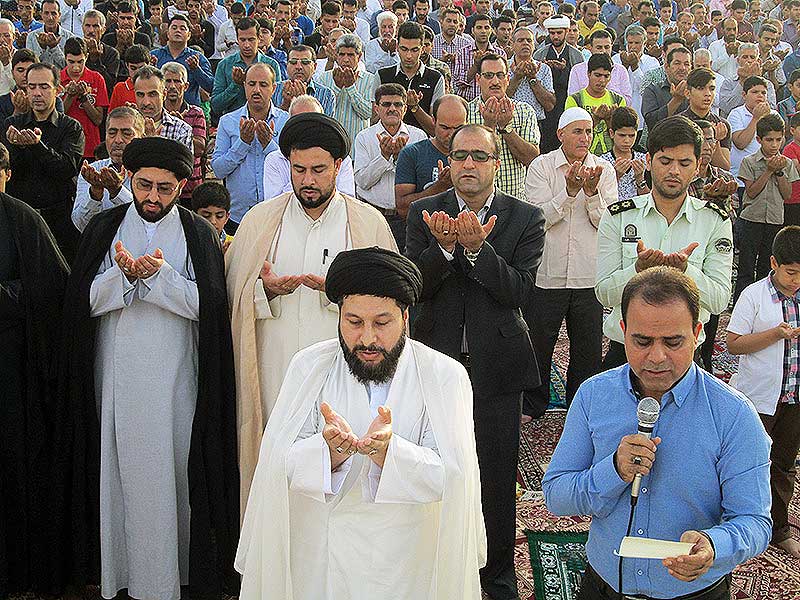 Question 143: Why is the Eid prayer led by one person and the Eid qunut dua led by another person?

Answer 143: The Prayers for Eid al-Fitr and Eid al-Adha are obligatory during the presence of the Imam, Peace be upon him, and when he has complete freedom of action as well as the fulfillment of other required conditions, but they are approved during the Occultation (Ghaibat) of the Imam, and it is more cautious to offer them individually during the Period of Occultation of the Imam. There is, however, no objection in offering them with Jamã’at with the hope (that it shall be desirable to Allah), and not with intention that it has come down in the Shari’at The time for offering these two prayers is from the rising of the sun to noon. It does not become due if not offered.

Its English translation is as follows: “O Allah, Possessor of Majesty and Greatness, Possessor of Generosity and Almightiness, Possessor of Forgiveness and Mercy, Possessor of Protection and Pardon, I ask Thee, for the sake of this Day which Thou hast set for Muslims a Day of Rejoicing, and for Muhammad, Blessing be on him and his Progeny, (a source of) treasure, honour, dignity and even more, to send Blessing to Muhammad and his Progeny, and to enter me (or my name) in every good deed, Thou hast entered in it (the names of) Muhammad and Muhammad’s Progeny, and remove me (or my name) from every evil, Thou hast removed from it (the names of) Muhammad and Muhammad’s Progeny, Thy Blessing be on him and them. O Allah, I ask Thee for every good thing asked for by Thy pious Devotees, and seek of Thee for the refuge sought for by Thy pure Devotees.”

Period of Occultation (of the Twelfth Imam). (When these prayers are offered), it is permissible to recite the words loudly by the Imam (when offered with Jamãat), or by the individual (when offered individually). It is also approved to raise the hands at the time of reciting the Takbirs, and offer it in large open spaces excepting Mecca. It is disapproved to offer these prayers under a roof.

Like all other Jama’ats, the Imam is not responsible in these prayers for anything except recitation.

If a person doubts about the number of the Takbirs or Qunuts (in these prayers), and the doubt occurs in its proper place (of compensation), he shall decide in favour of the minimum.

In the prayers for Eid al-Fitr and Eid al-Adhà, there is neither a call for prayer (Adhãn), nor a call for standing for prayer (Iqamah). Of course, it is approved for the Muadhdhin (one who calls for prayer) to call (loudly) three times: ‘Assalat’ (i.e., The prayer is ready).[1]

– If you are going to offer it individually, you must recite the whole Dhikrs by yourself.

– If you want to offer it in congregation, some of its Dhikrs are recited by the Imam and others by you and the Imam simultaneously.

– When the Imam of prayer is reciting Surah al-Hamd and al-Ikhlas (or al-A’la) others just listen and don’t recite these Surahs by themselves.

– Other Dhikrs such as Takbirs, dua in Qunut, Ruku, Sujood and Tashahhod are being recited by the Imam of Prayer and all Mamomeen altogether.

– Since this prayer comes only once a year, there is often difficulties about how to offer this prayer and recite the dua in Qunut. So, a mukabbir (one who pronounces takbir) is usually recite this dua in order to help others recite this dua correctly. However, the Imam of prayer and all Mamoneen are reciting it by themselves.[2]