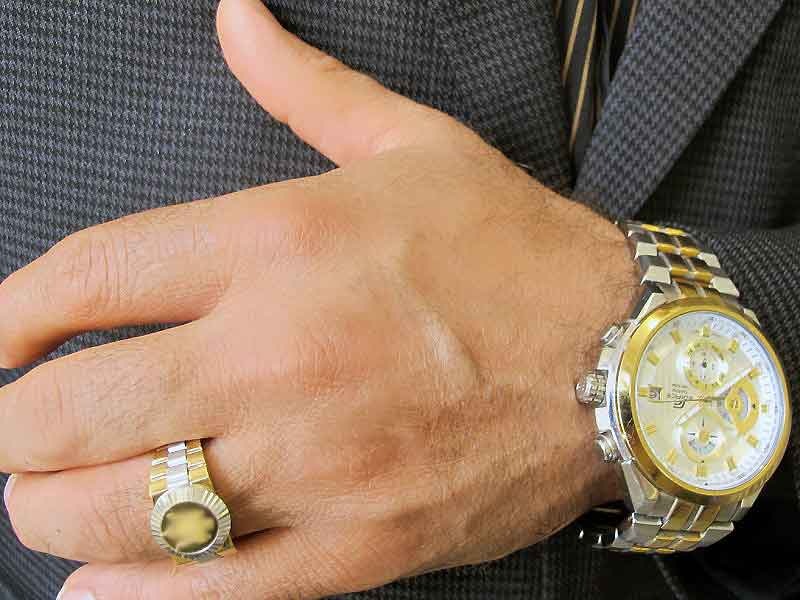 Question 485: Assalamu alaikum! Could you please advise if wearing gold-plated (only surface of the watch is covered by gold dust) watch is halal or haram.

May Allah bless you!

Answer 485: According to maraja’, it is not permissible for men to adorn themselves with whatever is called gold irrespective of whether the gold is yellow or red or white.[1]

There is no objection in making the frame of gold for a watch, and keep it with oneself (while offering prayers).[2]

But, if it is a gilt watch, maraja have different opinion about it as follows:

Khamenei (ha), if it is considered as gold it would be impermissible for men to wear it.

Sistani (ha), there is no objection in it.

Safi Golpayegani (ha), if it really contains gold it is impermissible.

Note: If there is a little gold used in it that it is not considered to be gold in the common view (Urf), there would be no problem in wearing it.[3]

If it is not hanging, though it may be in pocket, there is no objection in it! [4]

Regarding other metal, if it is known through checking a metal with an expert that it is white gold, it is haram (forbidden) for men to wear it. As for wearing silver, there is no problem in wearing it.

If a metal is called white gold, it is in fact the yellow gold which becomes white when a white metal is blended with it; therefore it is haram. In case, however, there is so little gold in it that it is not considered to be gold in the common view, there is no problem in wearing it. As for wearing platinum, there is also no objection in wearing it.[5]

Rather, there is no objection even in patching garments with silk or making the borders of the garments with silk, provided that they are not to the extent that they may be called silken, and in case of borders for garments, it is more cautious that they should not exceed four fingers when joined together in width. Rather it is more cautious to observe this measurement even in case of the patches of silk on the garments.[6]

If a person doubts whether a garment or ring is made of gold or anything else, it shall be permissible to wear them, and offer prayers wearing them.[7] 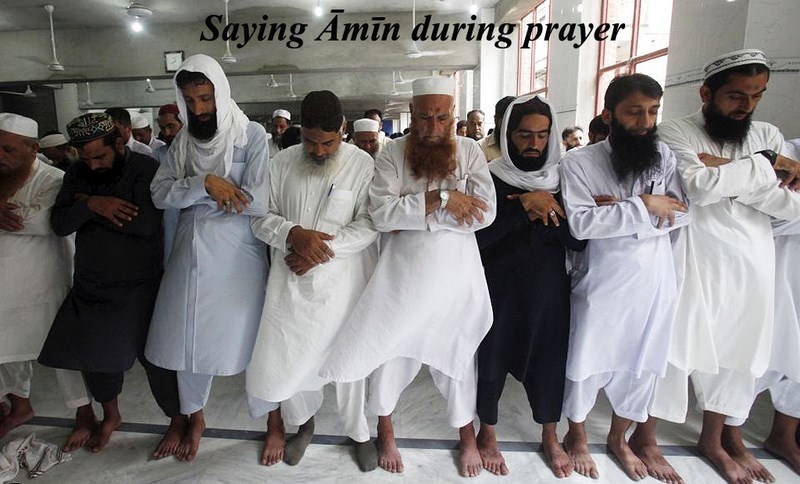 Question 017: How do I explain to my Muslim brothers that responding loudly after the Sheikh, during prayers is not part of Islam?
Answer 017: As for the Islamic laws, such as prayer, khums, zakat and etc., can only be determined by the divine legislator (share’: i.e. the acts of worship in which the contents (of prayer and etc.) are determined by the Holy Quran and traditions from the Holy Prophet (pbuh) and his household) which is called Ahkam Tauqifi, one who even has deep knowledge about Islam is unable to add anything other than what has been ordered by the divine legislator.

In prayer, one must not recite anything other than ‘ḏikr’; otherwise the prayer would become void. Just as the Shia have obtained all the rest of their teachings through the instructions and commandments of the Prophet and his household (pbuth), in this matter too they act in accordance to their instructions.

Based upon narrations, the Ahlul Bayt (pbuth) have told us that ‘saying ‘Ameen’ after reciting sūrah ‘al-Hamd’ is not part of the prayer, hence it is not permissible to say it’. It is narrated from Imam Sadiq (pbuh): ‘Whenever you are praying in congregation, and the leader of the congregation finishes reciting ‘Al-Hamd’, do not say ‘Ameen’, say instead ‘Alḥamdulillāh rabbi al-ʿālamīn’. [1]

The maraji’ have given the following fatwa based on the mentioned narration: ‘Of the acts which invalidate the prayer; is saying ‘Ameen’ after reciting ‘al-Hamd’, although if someone says it mistakenly or out of ‘taqīyah’ (dissimulation), the prayer is not void’. [2]

Finally, it is necessary to mention that according to Shīʿah Islamic law, it is not actually compulsory to say ‘Alḥamdulillāh rabbi al-ʿālamīn’ after ‘al-Hamd’; it is just mustahabb (recommended) . However, most Sunni schools of thought consider it an obligatory part of prayer, hence the onus is upon them to verify their claim through the Qur’ān and Prophetic Traditions.

Note: The traditions concerning the saying of Āmīn in prayer are of two types:

1) Traditions in which the chain of narrators includes Abu-Hurayrahh; e.g. “It is narrated from the Prophet (saws) that he said, ‘When the Congregation leader recites ‘walāḍ ḍāllīn’, you should say ‘Ameen’ because the angels [also] say ‘Āmīn’. Therefore every person who says Āmīn alongside with the angels will have all of his past sins forgiven.’”[3]

2) Traditions in which the following people are included in the chain of narrators (of which none meet the criterion for being acceptable in terms of ‘hadīth’ narration): Ḥamīd ibn ‘Abd al-Raḥmān ibn Abī Laylī, Ibn ‘adī, ‘Abd al-Jabbar bin wa’il, Suhayl ibn Abī Suhayl, ‘ala’ ibn ‘Abd al-Raḥmān, and Talha ibn ‘Umar. Ḥamīd ibn ‘Abd al-Raḥmān ibn Abī Lalī possessed a weak memory and is considered ‘weak’ (in terms of narrating Hadīth), Ibn ‘adī is an unknown figure (majhul), ‘Abd al-Jabbār bin Waa’il cannot narrate from his father since his father died six months before he was born (in this respect the tradition is weak). Regarding Suhayl ibn Abī Suhayl and ‘Ala’ ibn ‘Abd al-Raḥmān, Abu Haatam says, “Their narrations are recorded (written down), however they bare no authority and Talha ibn ‘Umar is not usable (for narrating hadith), his traditions are extremely weak.”[6]

With the existence of such weak and unreliable narrators in the chain of narrations, these narrations have no credibility and cannot be trusted.

Some [scholars] have tried to justify saying Āmīn in prayer with the following explanation: “[We] say Āmīn because the phrase ‘Ihdinā ṣ-ṣirāṭ al-mustaqīm’ is a du‘a (supplication).”

In reply to this, it must be stated that this phrase only becomes a supplication if it is recited with the intention of supplicating, however those reciting it intend for it to be a part of the prayers and the Quran recited therein, not as a supplication.
Furthermore, if it were permissible to recite every supplicatory phrase for example ‘rabbanā aghfir lanā wa qinā ‘adhāba al-nār’ with the intention of supplicating, then it should also be permissible to recite Āmīn after every supplication, yet no one [of the scholars] holds this view.[7]

[2] Tawdih al-Masa’il (annotated by Imam Khomeini), vol. 1, pg. 617. This ruling is agreed upon by all the respected jurists.

[4] . Abu Hurayrah Abd al-Rahmaan ibn Sakhr al-Azudi (22 BH-59 AH): eight hundred Sahaabis and Taabi’is have narrated from him. During his rule, Umar appointed him as governor of Bahrain, but due to his weakness in character and leniency, he was dismissed from this responsibility. He spent most of his life in Medinah. Taqiyuddin Sabki has a booklet entitled “Fataawaa Abi Hurayrah”, and Abd al-Husayn Sharafuddin has a book entitled “Abu Hurayrah” on him. (Al-A’laam 4/80, 81). Hujjati, Asbaab al-Nuzul, p. 216. 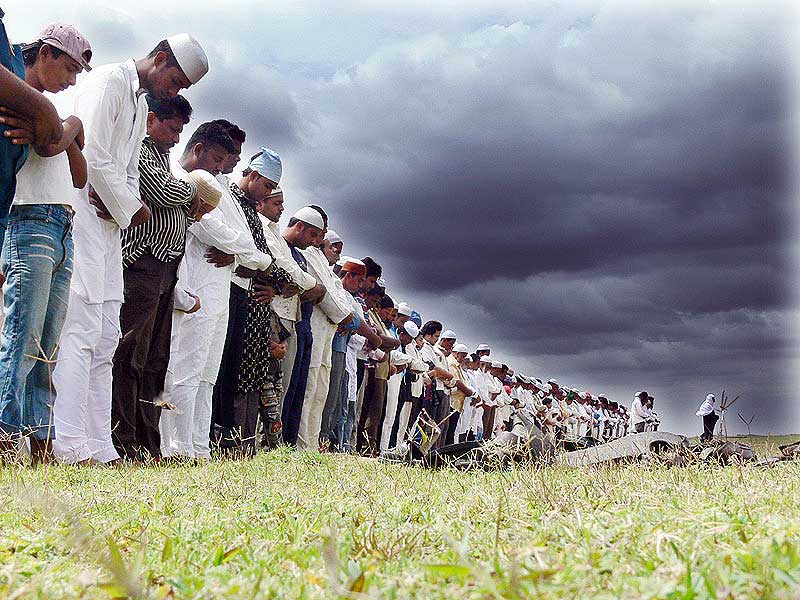 Question 547: Can you please tell us those things which invalidate the prayer?

Answer 547: There are a number of things which invalidate the prayer. They are called mubtilat, as follows:

1, The minor and major pollutions, (i.e., urine, feces, Janabat, etc.) They invalidate the prayer whenever they occur in the prayer, though at the time of reciting the letter “mim” which comes in the Salam (at the conclusion of the prayer), regardless whether it is done deliberately, erroneously or inadvertently, to the exclusion of one suffering from incontinence in urination, stool or a Mustahadah (a woman having undue menses), as has been mentioned earlier. END_OF_DOCUMENT_TOKEN_TO_BE_REPLACED 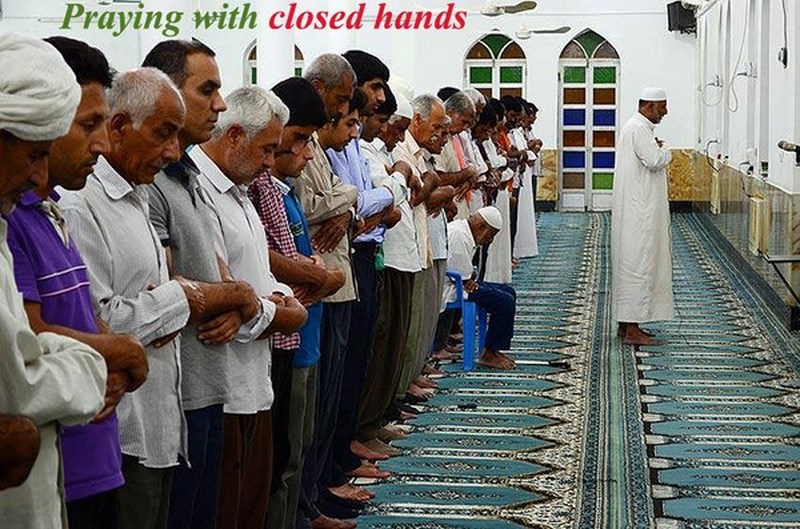 Question 016: How do I explain to my Muslim brother that folding the arms during prayers is not part of Islam? Is praying with closed hands a method that didn’t exist during the prophet’s time?

Answer 016: Takfir or Takattuf, which means putting one hand over the other in the way it is done by others than ourselves (i.e. the non-Shi’ahs). It invalidates the prayers, according to the stronger opinion, if done deliberately, but not if done inadvertently, though it is more cautious to offer the prayer again. There is, however, no objection if it is done by way of Taqiyyah. [1]

Praying with closed hands is a method that didn’t exist during the prophet’s time, because the prophet (pbuh) himself would pray with open hands,[2] and since the Shia solely believe in following the prophet (pbuh) and the Imams (as) in all fields, they also pray with open hands, and regard praying with closed hands as bid’ah or forbidden innovation. This method of praying was innovated during the second khalifah’s rule, became the formal prayer style then,[3] and was continued till today, to the extent that most Sunnis still pray the way the second khalifah had ordered in his time.[4] The Imams (as) have said that this method resembles that of the kafirs and the Maji and have asked their followers to pray with open hands; the same way the prophet (saws) would pray.

Abi Hamid Sae’di has described the prophet’s (saws) prayer in a hadith in full detail, from the beginning of the tahbiratul-ihram till the end of the salam, yet hasn’t mentioned anything about him closing his hands, and instead says that after saying the takbiratul-ihram, he brought his hands down by his sides.[5]

At the same time, one can’t say that closing the hands isn’t obligatory in the prayer and is only mustahab, and that is why the prophet (saws) wouldn’t close them, because it is impossible for him not to perform this “mustahab” act all his life.

In yet another hadith, Hammad ibn Isa asks Imam Sadiq (as) to portray the full and correct prayer for him. The Imam (as) stood towards the Qiblah, observing all of the mustahab acts, said the takbiratul-ihram and began reciting and went on to finish the prayer the way the Shia currently pray, ending it with the salam.[6] In this hadith, the Imam (as) was showing Hammad how the prophet (pbuh) would pray, yet there is no sign of the closing of the hands, and if this act was to truly be a tradition of the prophet, he would have surely included it in his description of the prophet’s (pbuh) prayer.

There are also multiple hadiths by the imams that say this act resembles that of the Maji and the kafirs and one shouldn’t practice it; here we will list a few:

[2] . The hadith for this subject will come later in the article.

[3] . Sahl ibn Sa’d’s hadith on this matter that Bukhari has narrated is good proof for this claim: “The people were told that men should put there right hand on their left arm in prayer” (Fathul-Bari fi Sharh Sahihil-Bukhari, vol.2, pg.224) because if the prophet (pbuh) had ordered the people to do so, the hadith would have said that the prophet (pbuh) had ordered them, not that “the people were told…”