Question 638: Salaam. I would like to know if it is necessary to wash hand/feet with soap for wudhu if we have applied lotions/creams containing oil. Also, is wudhu/ghusl valid if we have applied chemical henna that forms a layer which peels of later? You think Applying Henna or cream before Wudu is considered as a barrier to water reaching the skin?

Answer 638: If the effect of lotion or cream that left on the skin after it is applied is nothing but just moisture, and so it does not constitute a barrier to water reaching the skin.[1]  Otherwise, you should wash it with soap or any other thing before you want to perform Wudhu, Ghusl or Tayammum. END_OF_DOCUMENT_TOKEN_TO_BE_REPLACED

Answer 141: The grand maraja’ answer in this regards is as follows: If one who becomes jonob during a night of the holy month of Ramadan and is sure or probably knows that if he goes to sleep he will wake up before morning Adhan (call to prayer) and do ghusl. So, if he falls asleep with the decision till Adhan, his fast would be considered as valid.

If one goes to sleep and wakes up later and knows or guesses that if he wants to go to sleep again he’ll wake up before morning adhan with the decision to do jinabat ghusl but he won’t wake up till adhan, then one must make his fast up.

There is no need to give Kaffarah even if he wakes up of the second sleep and goes to sleep for the third time and won’t wake up till adhan.[1]

Index: Rules concerning Janabat during night or day time in the month of Ramadan, answer 394.

Index: Things from which a person keeping fast must abstain & Kaffarah (Expiation), answer 372.

Index: Number of things which are disapproved (Makruh) for a person observing fast, answer 566.

Index: Rules of prayers and fasting performed without ghusl, answer 034.

[3] . Tahrir al-Wasilah of Imam Khomeini (ra), Vol. 1, Chapter on Things Which Must Be Refrained in a Fast. 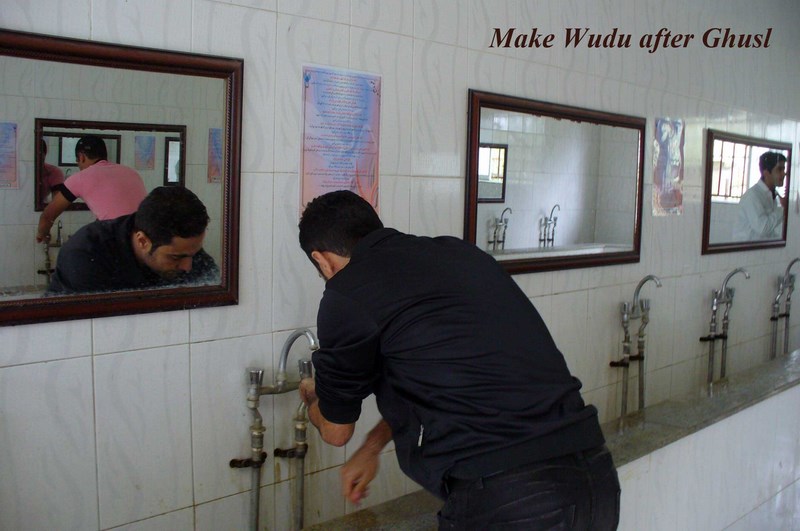 Question 035: Is it obligatory to make wudu after ghusl in order to offer prayers?

Grand Ayatollahs Khoei, Tabrizi, Sistani, Noori, Zanjani and Vahid: One who has performed jinabat ghusl mustn’t perform wudu in order to offer prayers. If one has performed other mustahab and obligatory ghusl except medium Istihadah ghusl, one would be able to offer his\her prayers without wudu, although one is supposed to perform wudu as well, according to a recommended (mustahab) precaution.

Ayatollah Makarem: One is allowed to offer his prayer by any obligatory and mustahab ghusl such as jinabat or other one, but, according to a recommended precaution, one should perform wudu if he has performed other ghusl but jinabat.

In Conclusion: One has to perform wudu if he\she wants to offer his\her prayers, however he has performed a mustahab ghusl, according to the fatwa of grand Ayatollahs Imam Khomeini, Bahjat, Khamenei, Safi Golpayegani and Fazel Lankarani.

Sayyid Sistani (ha) says: A person who does Ghusl of Janabat should not do Wudhu for the prayers. In fact one can offer prayers without performing Wudhu after all Wajib Ghusls (except the bath for medium istihaza) as well as after Mustahab Ghusls. In the case of Mustahab Ghusls, however, it is better to do Wudhu as a recommended precaution.[1] 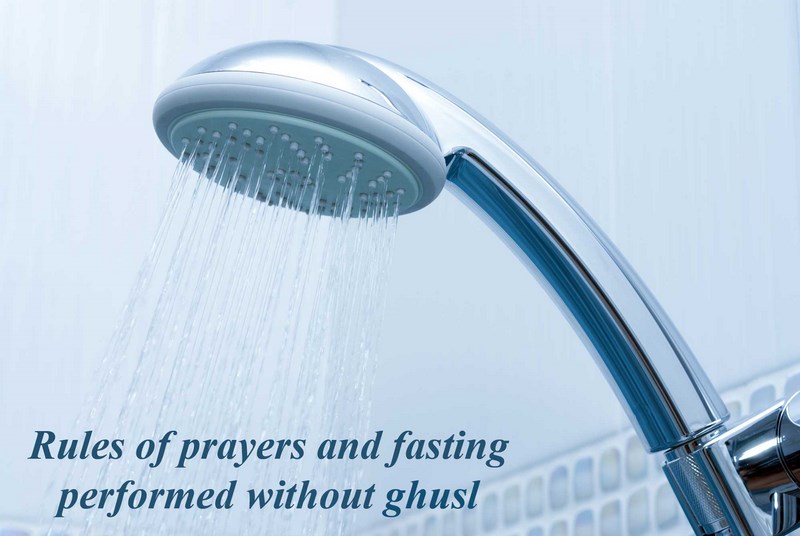 Answer 034: Undoubtedly, one must make qada, as all the fasting and prayers have been done in the state of Janabat, according to Ayatollah Khomeini, Bahjat, Tabrizi, Khamenei, Makarem, Vahid and Sobhani.[1] If he\she knew that, his\her prayer and fasting in this state is regarded as invalid. What should one do if the one didn’t know the rule concerning this issue nor knew that performing ghusl is required for doing such acts?

Remember, to act based on your own marja’ ruling. Here are some of the answers of our contemporary scholars concerning this issue, as follows:

According to Imam Khomeini (May his soul rest in peace), who had replied to the question: What is the ruling on a woman who ignorantly didn’t know the rules concerning womens ihtilam and then she has done her worships without ghusl? He replied as follows: If they weren’t sure that they have become polluted, (jonob) there would be no need to compensate those prayers that have been offered in that state, however in any case, her fasting were considered as valid.

According to Ayatollah Sistani, Safi Golpayegani and Fazel (ha): if you didn’t neglect learning Islamic laws your fasts have been done in this state would be in order, but you must perform Ghusl and fulfill the qaza of your prayers.[2]

Ayatollah Noori, Your fast is in order, but you have to qadha all your prayers offered in the state of Janabat.[3]

In the Holy Quran Allah (SWT) says: “Say [that Allah declares,] ” O My servants who have committed excesses against their own souls, do not despair of the mercy of Allah. Indeed Allah will forgive all sins. Indeed He is the All-forgiving, the All-merciful.”[4] 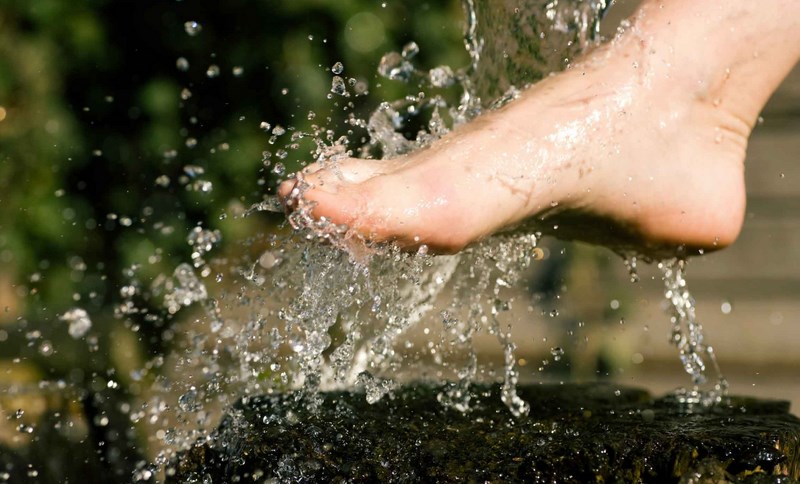 Question 031:  If someone does ghusl and after a week finds out that there was a barrier, such as nail polish on their left foot, do they need to repeat the entire ghusl or is it sufficient just to wash that area.
Answer 031: If the Tartibi (sequential) Ghusl was performed, one must only wash that part where the barrier was and that would be sufficient, even though time has passed and all parts of the body had become dry. Therefore, there would be no need to repeat the entire Ghusl nor to repeat washing the whole left side of body. However, if the barrier was on the right side of body and the Tartibi Ghusl was performed, one must wash that part and then wash the whole left side of body.

According to Khomeini (r.a), if one finds out that there was a barrier on his or her body, one must repeat the entire Ghusl if he or she was performed Irtimasi (submerging the whole body) Ghusl, whether or not the barrier was on the left side of the body or right.

It should be noted that all prayers offered after the Ghusl was performed are invalid. The obligatory prayers must be repeated, however fasts are treated as valid.[1]