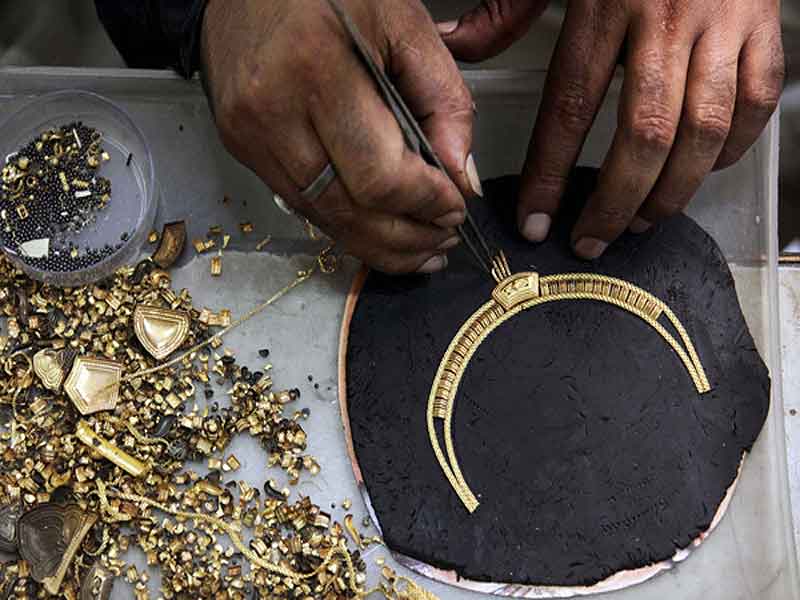 Question 328: Asalamualaikum. Dear Sheikh,If I am a goldsmith ,is it halal/haram for me to give zakat from my earning from such business(i.e.gold)? Thank you

1- If gold meets the criterion of being made into coins, and is in currency for transactions, is in one’s possession, and reach the taxable limits, zakat will apply.[1] But if these coins are made into ornaments and used by women as ornaments, e.g., necklaces and bracelets, then zakat will no longer apply.[2]

Note: Zakaat [obligatory charity] must be paid on gold if it reaches the Nisaab [i.e. the minimum amount liable for Zakaah], which is 20 Mithqaal [a measure which equals 70 grams of pure gold, according to most of scholars], this means that one should pay ½ a Mithqaal as Zakaat, i.e., 2.5% of the value of gold. If 4 Mithqaal is added to the previous mentioned value, 2.5% of gold should be paid again as the liable amount of Zakaah.[3]

However, if a khums year passes and you have other required conditions (which have been mentioned in Tawzih al-Masael of maraja’ (ha)), you are just supposed to pay Khums.

Index: How to calculate Khums on a house purchased with Sahm e Sadat, answer 046.

Index: Khums in the Holy Quran and Traditions / Things on which Payment of Khums is Obligatory, answer 043.

Index: Obligatory of paying Khums on a plot of land you have the intention to sell it, answer 567.

Index: Things on which Payment of Zakàt is Obligatory or Recommended, answer 044.

Index: Zakat of Gold and Silver and its criterion, answer 039.

[3] . Tawdih al-Masa’il (annotated), vol. 2, pg. 131; Sistani and Saafi Golpaygani (inquiry from their offices); Zanjani: “Gold and silver coins used as currency that women use as ornaments, if are still commonly used in transactions as currency, are subject to zakat, but if they aren’t commonly used in transactions as currency, zakat will not apply, but it is still a recommended precaution to pay their zakat as well.” Tawdih al-Masa’il (annotated), vol. 2, pg. 130.

Question 045: What is Zakat al-Fitrah and on whom its payment is obligatory? Can you also please let me know the commodity for, and the quantity of and the time when Zakãt of Fitrah becomes obligatory Zakät?

Brief Answer 045: At the time of sunset on Eid ul fitr night (i.e. the night preceding Eid day), whoever is adult and sane and is neither unconscious, nor poor, nor the slave of another, he should give, on his own behalf as well as on behalf of all those who are his dependents, about three kilos per head of wheat or barley or dates or raisins or rice or millet etc. It is also sufficient if he pays the price of one of these items in cash. As per obligatory precaution, he should not give from that food which is not staple in his place, even if it be wheat, barley, dates or raisins.[1] END_OF_DOCUMENT_TOKEN_TO_BE_REPLACED 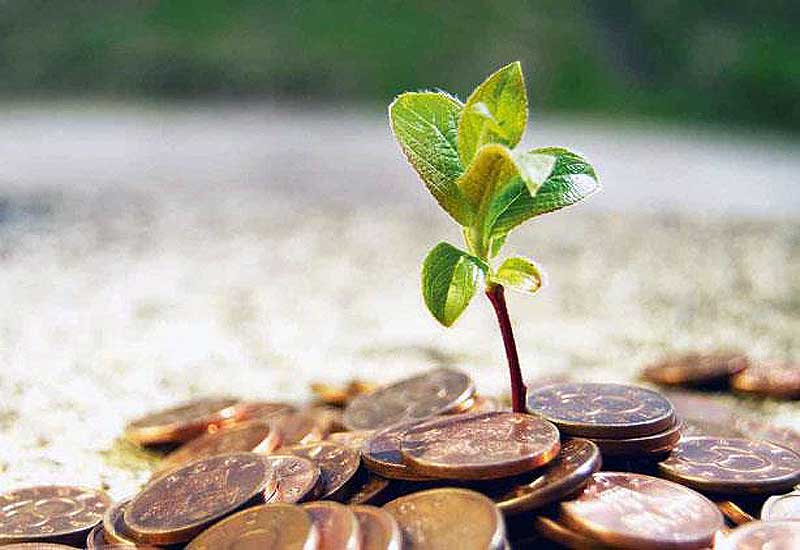 Question 044: Can you please tell us those things on which payment of zakat is either obligatory or recommend?

Answer 044: Zakãt is obligatory on three cattle, namely, camels, cows and sheep (male and female both), two rich minerals, namely, gold and silver, and four cereals, namely, wheat, barley, dates and raisins (or currants), and it is not obligatory except on these nine items.

Note: some scholars have considered Zakat to be payable on the wealth in business, as a necessary precaution.[1] Some other scholars consider payment of Zakat on invested capital as recommended.[2]

Zakãt is approved on fruits and other things grown on land including even saitwort excluding vegetables or green crops (of grain) like Qatt (a grain eaten by desert people after pounding it), brinjal (or aubergine), cucumber, melon and the like. It is not free from difficulty in declaring payment of Zakät to be approved in case of (other) grains The same is the case with merchandise and mares. As regards horses, ponies and donkeys, Zakãt is not approved in their case.

Payment of Zakat on Cattle: There are four conditions for the obligation of Zakat on cattle in addition to those mentioned earlier. They are: the Nisabs (criteria of payment of Zakat), grazing in the pastures, completion of one full year and their not being employed for service.

all the numbers without taking into account the units So in case of the number being 121 camels, three forties shall be taken into account and three Bint-i Labuns shall be payable as Zakãt.

Rules Concerning Grazing in Pastures: It is a condition that the cattle (on which payment of Zakãt is obligatory) should have grazed in the pasture throughout the year, so that if it happens to be fed on fodder during the year in a way that according to the custom or tradition it may cease to be called a cattle grazing in the pasture, it shall not be obligatory to pay Zakat on it

Rules Concerning (Completion of a Whole) Year: A year is considered to be complete after the passage of eleven months. Apparently the Zakãt is shifted to its owners (i.e. those who are entitled to receive it) at the start of the twelfth month when it becomes their wavering ownership and its payment becomes obligatory unwaveringly, and so it is not permissible for the owner of the property to make any changes in it which may deprive those entitled to receive it of their right. In case he does, he shall be held responsible for it. Of course, if any of the conditions are not fulfilled unintentionally in a way that the property falls short of the Nisab during the twelfth month, the property shall return to its previous owner, and the obligation for the payment of Zakãt shall be dropped. According to the stronger opinion, twelfth month shall be counted in the first year and not in the second.

Zakät on Gold and Silver: The following are some conditions in addition to the general conditions already understood.

I – Nisãb of Zakat on Gold: In case of gold, the Nisãb of Zakat is twenty Dinars, whose Zakãt is ten Qirats which is equal to half a Dinar, and one Dinar is one Shar’i Mithqal which is equal to 3/4th of a Sayrafi Mithqal. So twenty Dinars come to fifteen Sayrafi Mithqals, and its Zakãt amounts to 4/8th of a Mithqal. There shall be no Zakat on less than twenty Dinars of gold, nor if it exceeds a little until the excess reaches four Dinars, and that is equal to three Sayrafi Mithqals whose Zakãt is two Qirats, as one Dinar = 20 Qirãts. The same amount shall be payable for each excess of four Dinars, and there shall be no Zakãt on any amount of gold which is less than four Dinars, but not in the sense that there shall be no Zakãt on it at all, as is the case when gold is less than twenty Dinars, but what is meant by exemption of whatever lies between two Nisabs is whatever exceeds the amount of Nisãb until its reaches another Nisab shall be supposed to belong to the previous one. So the first Nisab of gold begins from twenty Dinars until twenty-four Dinars, and it falls under the first amount of Zakãt that is half a Dinar.

2 – Nisãb of Zakat on Silver: The Nisãb of Zakãt on Silver is two hundred Dirhams of which Zakãt is five Dirhams. Then on each amount exceeding forty Dirhams, there shall be an addition of one Dirham in the amount of Zakãt, whatever the amount may be. There shall be (initially) no Zakãt on silver of less than two hundred Dirhams, and so also there shall be no Zakãt on an excess of less than forty Dirhams, in the sense already explained under the rules relating to the Zakãt on gold. A Dirham is equal to six Dawaniq, which is equal to half of one-fifth Shar’i Mithqal, as each ten Dirhams are equal to seven Shar’i Mithqals.

Explanation: The general rule in the payment of Zakãt on gold and silver is that when each of them reaches the Nisab i.e. twenty Dinars in case of gold and two hundred Dirhams in case of silver, 1/40th of the amount of gold or silver, as the case may be, shall be paid as Zakãt, and so its owner shall be considered to have paid what was due. If a person pays a bit more than the due amount of Zakãt, there shall be no objection, rather it shall be better and shall add to the beneficence.

Second: For the obligation of payment of Zakãt on a gold or silver coin, it should bear the seal of a king or somebody like him of whatever time or place, belonging to Islam, or a non-believer, with writing on it or without it, even if the writing has been obliterated for some reason. In case a coin of gold or silver does not originally bear a seal or writing, payment of Zakãt shall not be obligatory on it, except when it was in currency, in which case, according to the more cautious opinion, it shall be obligatory to pay Zakát on it. If a coin (of gold or silver) is used, for example, as an ornament for decoration, then it shall not be obligatory to pay Zakãt on it, regardless whether its value exceeds (the limit of Nisäb) or falls short of it, and whether it was used in a way as transaction or not.

Third: Completion of a year. It is also a condition that the whole Nisab should subsist for a full year. If, therefore, during the year it falls short of the required limit or it is changed in substance, etc., or by means of casting, even if in order to escape payment.[3]

For further information in this regards, please refer to following answer:

Index: Zakat of Gold and Silver and its criterion, answer 039.

[1] Tawzih al-Masail (with annotation by Imam Khomeini), vol.2, p. 107, issue No.1853, Grand Ayatollah Sistani: “As an obligatory precaution, upon the wealth in business”. 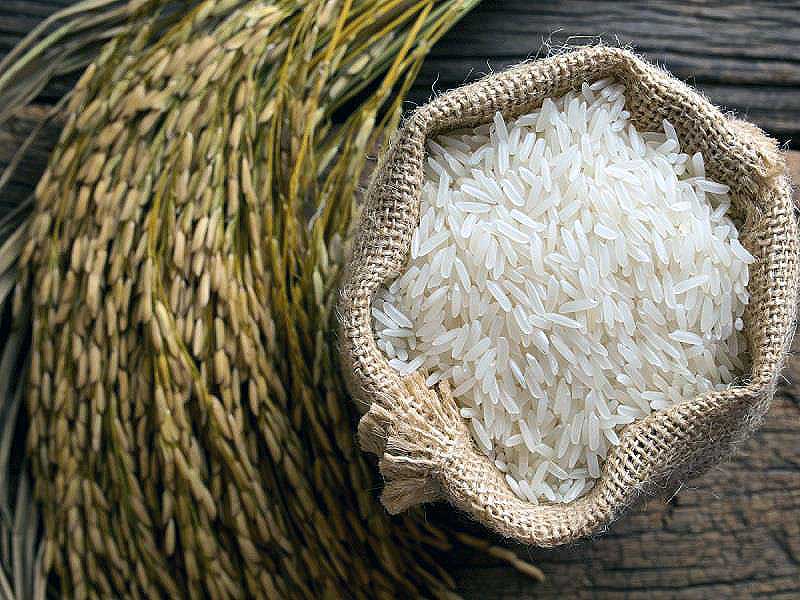 Question 040: What is the relevance of differentiating between Sayed holms and Non-Sayyed holms. I have never seen or heard of it until recently? Is one supposed to pay more than the other? There were two holms boxes at Eid prayer. One for Non-Sayyed and the other for Sayyed. So, I wanna know about Zakat and difference between Sayyid and non-Sayyid holms?

Answer 040: The only difference is that, a person, who is not a Sayyid, cannot give fitra to a Sayyid, and if that Sayyid is his dependent, he cannot give to another Sayyid either.

Whoever is adult, sane and is neither unconscious, nor poor, nor the slave of another. He should give, on his own behalf, as well as on behalf of all those who are his dependents. END_OF_DOCUMENT_TOKEN_TO_BE_REPLACED 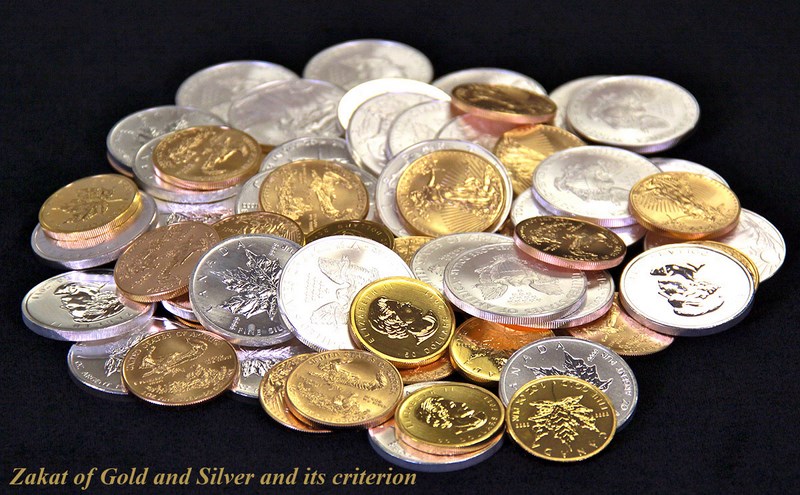 Question 039: In Sunni tradition, any pure gold a person possesses, even as given as a gift, one must pay a yearly zakat based on its weight. Does the same tradition apply to the Shia?

Answer 039: If gold or silver meet the criterion of being made into coins, and are in currency for transactions, are in one’s possession, and reach the taxable limits, zakat will apply. If these coins are made into ornaments and used by women as ornaments, (E.g., necklaces and bracelets) then zakat will no longer apply.

If the gold or jewelry being used isn’t for the woman’s ornamental needs, or exceeds their social status, and a khums year passes, it will be subject to khums.[1]