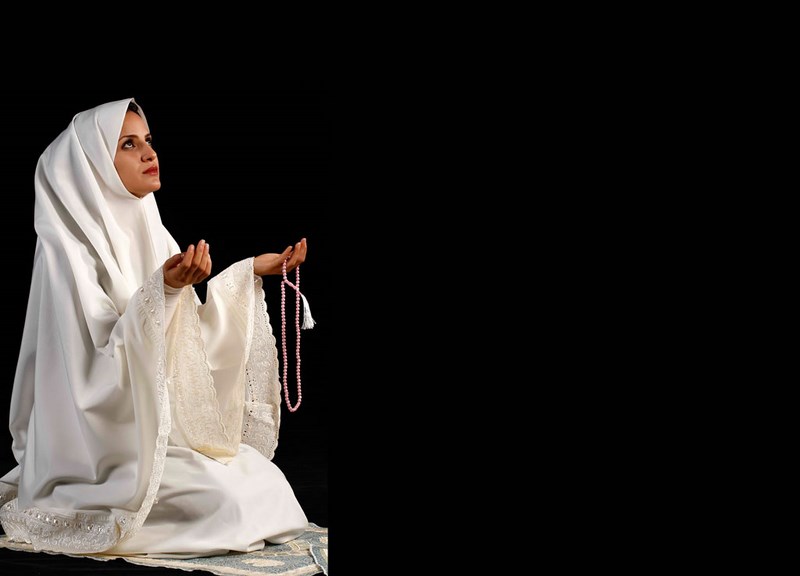 Question 020: Why must a women be covered when she prays to Allah (swt) in her own home and please provide Hadith. Is it merely to show respect? Is it to induce feelings of modesty and piety psychologically? It must be for our benefit as Allah (swt) is our creator and sees all whether we are we are covered or not. What is the philosophy of Hijab during prayer?
Answer 020: Setr (covering) is one of the Islamic Jurisprudence rules. In Islam, covering is not specialized for the women only and men have such special Islamic rules. Covering during praying is one of the rules in this matter. Perhaps the purpose of covering ourselves when praying is that the dignity and personality of a man requires him\her to show his\her respect for Allah (SWT) even there is no one in the room where praying can see him\her. Probably, we can conclude that the benefit of covering is at first observing this dignity and personality. The following are some reasons regarding why women must cover themselves when praying:

درعcloth like a shirt, called Dir’ (درع) which would cover from about the middle of their chest down to their knees or lower than the knees.) in case the dress is not thin”.[3] In Fiqhi term Khimar means something that a woman can cover her head and hair by. In the Holy Quran Allah (SWT) says: “And tell the faithful women to cast down their looks and to guard their private parts, and not to display their charms, except for what is outward, and let them draw their scarfs over their bosoms, and not display their charms except to their husbands, or their fathers, or their husband’s fathers, or their sons, or their husband’s sons, or their brothers, or their brothers” sons, or their sisters” sons, or their women, or their slave girls, or male dependents lacking] sexual [desire, or children uninitiated to woman’s parts. And let them not thump their feet to make known their hidden ornaments. Rally to Allah in repentance, O faithful, so that you may be felicitous”.[4]

Note: According to maraja, a woman is allowed to keep her face and hands uncovered in the presence of a non-Mahram man, provided that she does not fear of getting into a harãm act, that the exposure of her face and hand does not cause men to gaze at her in a forbidden way, and that it does not give rise to immorality in general. Otherwise, it is obligatory on her to conceal [her face and hands], even from those who are mahram to her. It is not permissible for a woman to expose the top part of her feet to a non-mahram onlooker. However, she is allowed to keep her feet —top as well as sole— exposed during salãt, if she is in a place where she is immune from the looks of a non-mahram person.[7]