Question 650: Assalam o alaikum. As in many countries have out door laundry shops where people come and wash their dirty clothes, which can have stains of najis blood or other things. So can we use those washing machines for our laundry? Actually, I want to know the Rules on using washing machines when you have doubts.

Answer 650: Generally, a well-known religious law says: “Everything is ritually pure for you unless you come to know that it is ritually impure.” This law declares everything to be pure unless one becomes sure a particular item has become impure. And as long as you are not sure that it has become ritually impure (najis), it is to be considered pure and you can apply all the rules of purity to it without any hesitation or doubt.[1] END_OF_DOCUMENT_TOKEN_TO_BE_REPLACED 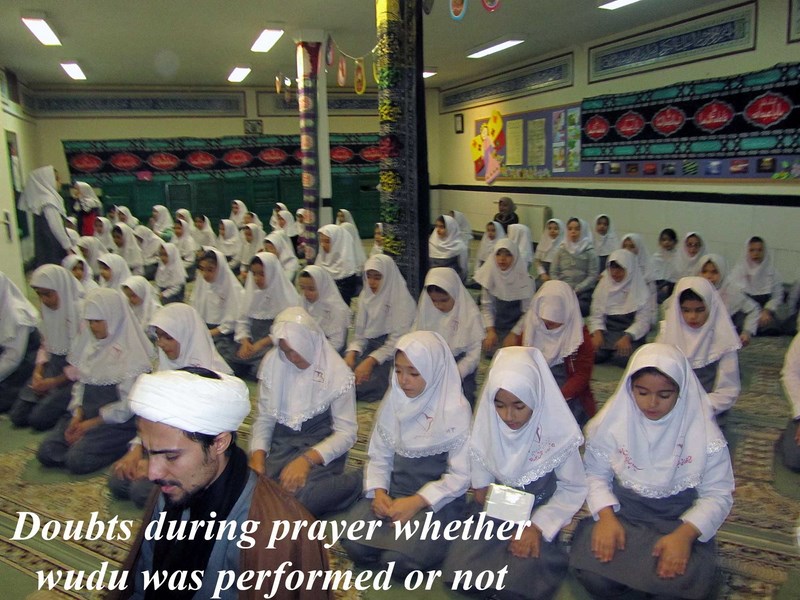 Question 036: If one gets Doubts (shakk) during the salah that wudu was not taken, should one break the salah to perform wudu?
Answer 036: If a person doubts during prayer (namaz) whether he has performed wuhu or not, his prayers is void, and he must perform wudhu and then pray. If a person is sure that he has performed wudu but doubts whether he has committed an act which invalidates it or not his wudu would be considered as valid.

If a person doubts whether his Wudhu has become void, he should treat it as valid. But, if he did not perform Istibra after urinating, and performed Wudhu, and thereafter some fluid was discharged about which he was not sure whether it was urine or something else, his Wudhu will be void.

If a person doubts whether he has performed Wudhu or not, he should perform Wudhu.