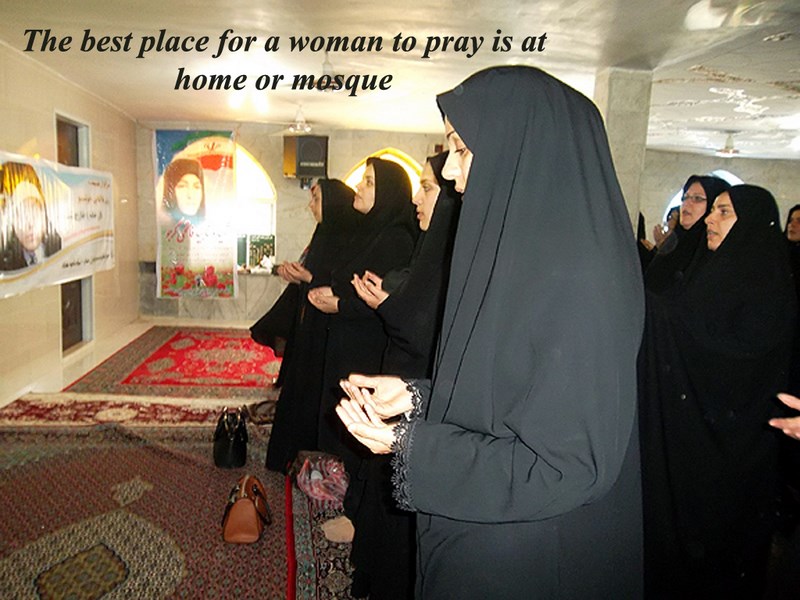 Question 015: According to some hadith, it is recommended for a woman to pray in her home as well as there are rewards for participation in congregational prayer. A wife in Islam is suppose to obey her husband except if he is asking something that is contrary to the teachings of Islam.

Answer 015: The man has certain rights over his wife. One of those rights is that she must obey him. The woman has the responsibility toward her husband not to go out of his home without his permission. If both the man and woman understand, trust, love and believe each other, the man should let her go to offer her prayers at a mosque.

There are two different opinions, according to the Holy Qur’an and traditions:

The Holy Qur’an: “And stay quietly in your houses, and make not a dazzling display, like that of the former Times of Ignorance.” [1]

So, the best place to pray for women is at her house. [2]

“O Prophet! Tell thy wives and daughters, and the believing women, that they should cast their outer garments over their persons (when out of doors that is most convenient, that they should be known as such and not molested). And Allah is Oft-Forgiving, Most Merciful.” [3]

So, Islam has ordered women to have hijab in order to be protected.

Ahadith: The Holy Prophet (pbuh) and Imam Sadiq (as) says: a woman who prays at home will get equal reward as praying at a mosque. They also say: if a woman prays at her house she will get more rewards than praying at other places. [4]

According to some scholars, it is recommended for a woman to take part in social activities and offer her prayers at mosque which is one of the best recommended act in Islam.

The believing women offered their prayers with the Holy Prophet (pbuh). [6]

The Holy Prophet (pbuh) recommended that men should not prevent your wives from going to the mosques. [7]

Sayyid Sistani (ha) says: It is recommended for women to attend congregational prayers as evidenced by an authentic tradition from the Commander of the Faithful, Ali (AS) that women used to attend congregational prayers but they were ordered to linger their sajda (prostration) because some men were wearing tight garments but there is another authentic tradition which says that a woman’s prayer at home is more virtuous than her prayer in a mosque. However, the conclusion that can be drawn from both traditions is that a woman’s prayer at a place where she is not seen by non-mahram men (strangers) is more virtuous. If she can perform her prayers in a mosque without being seen by strangers, the prayer in a mosque would be more virtuous in that case. God knows best.[8]

In conclusion, if her husband allow her pray at mosque she will get the rewards, if not and she offers her prayers at home she will receive the same rewards. In sha Allah.

[8] . The official website of the office of Sayyid Sistani (ha), Q&A: Mass Prayer.