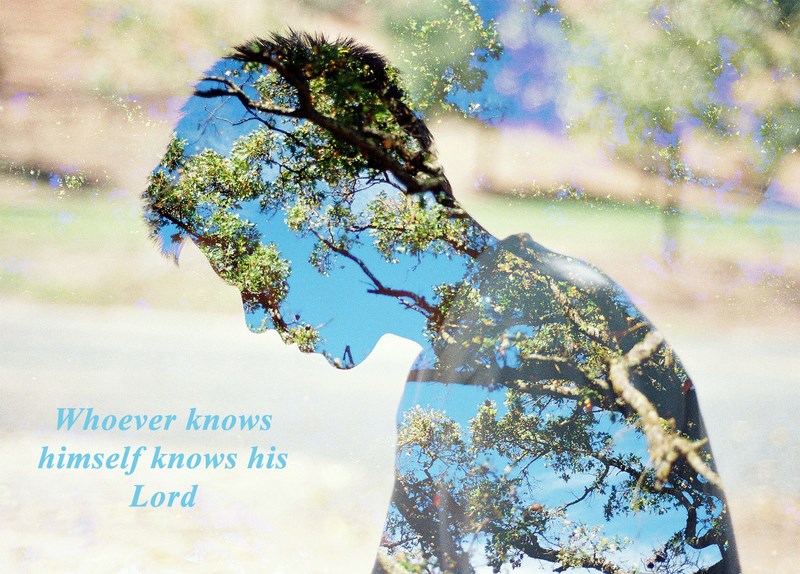 Question 274: Salam, “Man Arafa Nafsahu, Faqad Arafa Rabbahu” One who truely knows himself has already come to know Allah. Could you please eleborate further on that? How can one know Allah if he recognizes himself? What does that mean? What is the “self” (nafsu) which makes us recognize God? Does this mean that if we recognize the true purpose of our existance in this world we have recognised God i.e True existance belings to Him because He is independant and Needless and He alone is worthy of being worshiped. Everything belongs to Him and under his control (InaliAllah wa ina ilayhe rajaoon)?

The Arabic version of this hadith is as follows:

The following are some different interpretations regarding this noble hadith.

The Arabic version of this saying:

There are three ways for acquiring knowledge of Allah (awj). In other words, the intellectual or gnostic journey of the philosopher or the spiritual wayfarer [respectively] could fall under one of three categories:

Imam ‘Ali b. Abi Talib (ع) alludes to this method in the following words: “I came to know Allah by observing the strong wills that trembled, the difficult entanglements that were disentangled, and the decisions that were crushed.”[8] In another instance he says, “Whoever comprehends himself has indeed comprehended his Lord.”[9]

“Is it not sufficient that your Lord is witness to all things?”[10]

First, He is witnessed and comprehended, and then [in His light] all other things, for He is the Light of the Heavens and the Earth. The Essence of Unicity [i.e. Allah (awj)] is the clearest witness to and proof of Himself and as such, renders unnecessary any intermediary for comprehension of Him.[11]

So it is that in addressing His messenger He says,

“You were certainly oblivious of this. We have removed your veil from you, and so your sight is acute today.”[12]

The veil is removed from the individual, not from the reality or from Allah (awj).

In the Supplication of ‘Arafah, Imam Husayn b. ‘Ali (ع) deals with this third method. He says, “O Allah!  Do others possess a light that You lack so that they must shed light upon You? When have You been absent so as to be needy of proof? When have You ever been distant so that Your effects and creatures should move us close to You?”[13]

And again in the words of Imam Husayn b. ‘Ali (ع), “Blind be the eye that does not behold You … It is You whom I beseech in seeking union with You, and it is Your own existence that I seek as proof for Your existence.” In this phrase, it is expressed that for the spiritual wayfarer, Allah (awj) is more manifest than the sky, the earth, the leaves of trees, etc.

Imam Ja’far b. Muhammad as-Sadiq (ع) alludes to this point in the following words: “When someone is present and manifest, we first know him through his self, then we get to know his attributes. But in the case of something absent, knowledge of its attributes precedes knowledge of its essence … Just as in the case of Yusuf’s brother, they studied Yusuf himself and recognized it was him. They asked him, ‘Are you really Yusuf?’ They did not formulate their question the other way around[14] (14); meaning, they reflected on the qualities of the person whom they were confronted with and realized that he was Yusuf. They did not ask others to identify Yusuf for them.”[15]

Based on the aforementioned explanations, it has been concluded that contingent existents are realities whose existence is nothing but their relation to the Necessary Existent. Otherwise, they would be needless in their essences which would in turn mean that they would be necessary by their essences, which is obviously false.

Thus, they are in their entire existence dependent on the Necessary Essence and it is impossible to view the relation [i.e. the creature, for as previously mentioned the contingent existent is nothing but that relation] without the object to which it is related (marbut ‘ilayh). That is, comprehending the effect independent of its cause is impossible. Thus, the comprehension of everything, even purely material existents, is concomitant with comprehending the Necessary Existent.

Index: Estrangement from people comes about as a result for knowing them too well, answer 060.

[14] It must be pointed out that in Farsi and ‘Arabic in asking if the person being addressed is the same one the former had heard about or known previously, he can put the question forth in two ways. He can say, in the case of ‘Arabic, a anta fuln (lit. Are you …?) or a fuln ant (lit. Is… you?). The latter case is not used in English. Therefore, the reasoning forwarded in the text should be understood in the context of the ‘Arabic language. (Tr.)